Product Management in the Age of Intelligent Products

Zinnov's Pari Natrajan on how PMs can navigate the coming storm.

In Summary: Attend any PM meetup or roundtable right now and the subject of Artificial Intelligence will consume much of the conversation. Some are pessimistic about AI's impact. Most are uncertain at best. As with any situation, the best response is to read, learn and understand and this deck from Pari is a great place to start.

Pari starts by breaking down the key platforms, players and verticals as well as what AI means in practice, before outlining how Product Managers should respond.

PMs must first understand how AI impacts their product then consider how it will impact the skills they need in their team. In the future, Product Teams will be more decentralised and data no longer a resource but a product in its own right.

After years working on wireframes and prototypes, it's exciting to design a product that lives inside a conversation, says x.ai's Dennis Mortensen.

In Summary: Amy is a bot that schedules meetings via email. For many, she is the first genuine AI product we've encountered.

Discussing the challenges his team encountered bringing Amy to life, Dennis discovered how ambiguous, counter-intuitive and downright dishonest we can be when interacting with our fellow human beings. The team spent a year defining the concept of time and most of their funding annotating the data they had painstakingly collected.

Next was the skills challenge. Instead of hiring a UI/UX designer, Dennis created the role of AI Interaction Designer to own the 'voice' of Amy by crafting dialogue models, scenarios and emotions such as empathy and politeness.

Finally there was the issue of 'fallback.' What should Amy say when she simply doesn't know? Overall, a fascinating glimpse into the PM challenges of the products of the future. 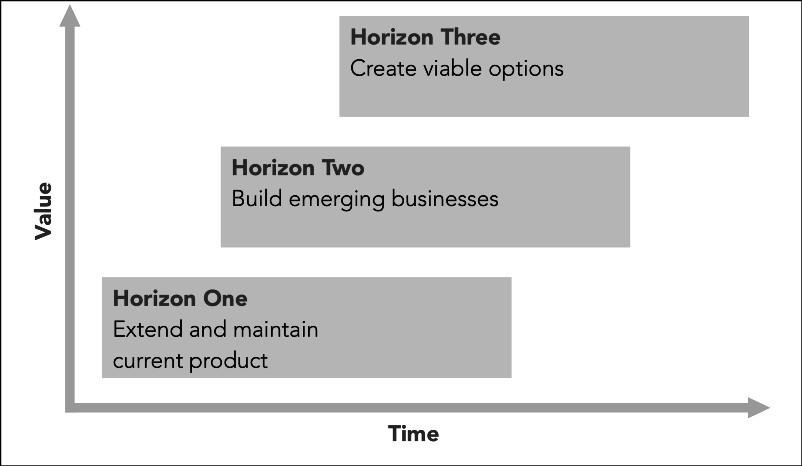 Don't get caught in the present, says William Gill.

In Summary: We live in the present but the future always comes around quicker than we think and great product teams don’t get stuck iterating their current product forever. What new technology might change the way you do business or build your product?

William uses the 3 Horizon Model to evaluate whether he is spending enough time thinking about the future. For any given product, PMs should spend around 25% of their time maintaining the product they have in the market right now. This is Horizon One.

Good PMs spend around 65% of their time working on the second horizon: the next product and at least 10% of their time thinking about the longer-term future: Horizon Three.

Where are we going, what are we trying to achieve, what’s coming next? PMs can only choose what to focus on today by thinking about it in terms of the future.

“Product Management is the art of knowing what to build.”

Anshu Sharma's Stack Fallacy is more relevant than ever for Product Managers.

In Summary: The history of product innovation shows us that companies who ignore the user in favour of the technology fail. They fail because they fall victim to what is known as the ‘stack fallacy.’

Stack fallacy caused telcos to dismiss WhatsApp as a simple app that sat above their layer of the stack and meant that Google struggled to build a compelling social network despite owning our email graph and our interest data via search.

It's far easier to innovate down the stack as you yourself are a natural customer of the lower layers so know what users need. Success in any given market always comes down to the same fundamental question “Who understands the user better?” Knowing what to build is 100 times more important than knowing how.

In Summary: Just because something has a number attached to it, doesn’t always make it true, valid, or relevant. Data has become the opium of modern tech companies and it's easy to cripple ourselves with information that doesn’t matter.

Contrary to popular belief, retention rate isn’t as useful a metric as churn rate. It’s good to be aware of it but it’s far less actionable, compared to other metrics.

Having high Net Promoter Score is meaningless in itself. A recent analysis found no support for the claim that NPS is a reliable indicator of a company’s ability to grow.

If you want to use data right, experiment with different types of analysis for different features of your product, in different stages of its life cycle.

What Product Managers need to know about user psychology

In Summary: The science of happiness tells us it's the result of 4 chemicals being released into our brains. These chemicals are dopamine, serotonin, oxytocin, and endorphin.

Dopamine is the exciting feeling we get when we are about to be rewarded. Serotonin flows when we feel confident and take pride in our work. Oxytocin is released when we feel trust, it's also released in response to the physical touch of a loved one. Laughing and crying releases small bursts of endorphin, as does physical distress.

How can we leverage this knowledge to build more delightful products? By helping users feel a sense of accomplishment for completing tasks, we can trigger dopamine. Likewise, social networks can trigger the release of serotonin as our sense of importance increases when we get likes and our network expands.

What we learned at ProductSF 2016

In Summary: Josh is a Product OG, having earned his stripes at Twitter, FB and Linkedin. Now at Greylock Partners, he organises #ProductSF, an event for founders and company-builders to get to know each other and discuss how to create better products.

This year, Josh invited some of the best minds in product to speak and share personal anecdotes.

From Musical.ly CEO Alex Zhu talking about how they figured out why downloads shot up every Thursday, to Reid Hoffman recounting lessons he learned starting and scaling LinkedIn to Pinterest's Ben Silbermann discussing how he evolved his process around product reviews to ensure involvement with the Product Team.

Finally, as all Product Managers need to start thinking about the implications of VR, Scott Erickson outlined the vision and design thinking that went into building Microsoft HoloLens.

In Summary: Uber’s original premise was simple: 'Push a button, get a ride.' You didn’t need to set your destination or select a product. You just hit a button, or two, and you were off.

But, as more features were added, Uber struggled to maintain this simplicity, so the Product Team decided to design the new Uber experience with a simple twist: 'Start at the end.' Where Uber originally asked you to think only about getting a ride, they now ask 'Where to?'

The Uber team also realised the service neglects the longest part of your journey: being on your way. In response, they began to think about the music you might want to listen, the menu at the restaurant you’re headed to, and how you stay connected to the people you’re going to see.

By knowing your destination, Uber's new product design gives you opportunities to make better decisions with just the right amount of context.

“When the product itself is so pleasurable to use it makes the activity more pleasurable, that’s good design.”

Products should be as visible as they need to be, says Dan Saffer.