Should your Product Team be a Squad?

ProductPlan's Greg Goodman weighs the pros and cons of how Spotify does product.

In Summary: Since 2012, when Spotify restructured its product teams into 8-person squads — developers and a product owner — much has been written about their approach. But it seems few organisations have actually adopted it.

Greg analyses the reasons why a product 'squad' structure might or might not make sense for your organisation.

Spotify’s squads may work for you if you want to streamline your agile development. The idea is for squads to be much more efficient, highly knowledgeable about the product’s functional areas, with faster development cycles creating more successful products.

However, if you’re not sure your product can handle independent updates at various times, or you worry about sacrificing overall product knowledge for functional expertise, you might want to investigate the squad method more deeply first. 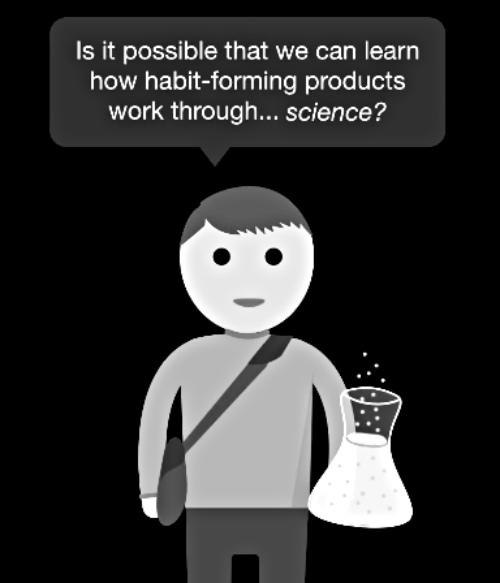 The science of habit-forming Products

In Summary: Hardbound is Nathan Bashaw's publishing startup, delivering mobile stories on a variety of topics. This week Hardbound partnered with Nir Eyal to break down exactly why products like Facebook are so sticky.

Our understanding of sticky products is (literally) rooted in science. An experiment on mice established a part of the brain called the Basil Ganglia that stores repetitive tasks in order to free up space in your active brain. Habits are therefore shortcuts in your brain.

Nir's 'Hook Model' outlines 4 elements that make up habit and uses each to illustrate why Facebook is so much more addictive than a newspaper.

Reward is the most important part. Experiments have shown that variable schedules of reward create much stronger habits than consistent ones. The stickiest products deliver rewards so varied that users literally crave them in their absence.

The secret of WeChat's Product success

In Summary: Less than half the age of Facebook, WeChat's metrics are staggering: more than 1/3 of the time spent by Chinese users on mobile is on WeChat.

Even more remarkable is the product itself. In contrast to the single-purpose products favoured in the West, WeChat is a complex world of e-commerce, messaging, payments, games and 3rd party services. It’s almost a parallel, alternative web.

Usability veterans, the Niesen Norman Group, conducted extensive user research on WeChat with users in Beijing and Tangshan and asked them to sketch out their mental models of WeChat.

When asked why they like WeChat, the most frequently mentioned attribute was convenience. Integration and simplicity are especially important because WeChat is mainly a mobile service.

When a system is convenient, it goes beyond usability and succeeds in being useful and simplifying a previously complicated task. WeChat does all of this, and that’s why it’s successful.

Do you know your Product's 'Job Story'?

In Summary: Too many companies focus on making their products better and better without ever understanding why customers make the choices they do.

Being cheaper and 'good enough' doesn’t guarantee that people will choose your product or service over all others. You have to know what job customers are hiring you to do before you can hope to create the perfect solution for them.

For AirBnb, that job is not just about function (having a nice bed to sleep in) but about creating the right set of experiences for customers. Those experiences have social and emotional components that may be even more powerful than the functional ones.

The experience of staying in an AirBnb is central to its customer strategy. The experience must match the customers’ vision of what they hired AirBnb to do.

7 ways to build an awful Product

In Summary: From design by committee to copying your competitors, this fresh take on the standard '7 ways' blog format covers Product Management anti-patterns that are familiar to us all.

However, anti-patterns occur for specific reasons: human dynamics and inclination. This article may be humorous in tone but also serves as a useful checklist of behaviours that are too easy to fall into and require constant discipline to avoid.

In Summary: To say Twitter has an execution problem is an understatement. When Jack Dorsey returned as CEO he was quick to clarify the brand's unique value proposition and promised many changes. A year later next to nothing has been delivered and Twitter continues to languish in people's expectations.

Twitter is such an influential product but it's decline in relevance is shocking. It has 3680 staff, some great PMs and engineers and a clear list of backlog priorities yet can't seem to make them happen.

Priorities include extending the tweet's character limit beyond 140, making it easier for users to follow topics rather than just people and fixing the chronic problem of abuse.

Above all, it needs to simplify it's core product. Too many people still don't understand what Twitter is. But it's inability to ship at any consistent pace means it doesn't look like turning the corner anytime soon.

The power of the Elastic Product Team

In Summary: When AirBnB set up operation in Cuba, Jon Golden was able to assemble a new Product Team in less than 10 weeks, complete the mission, then disassemble it 2 month later once its work was done. This exemplifies the elastic, vision-driven product management approach that allows AirBnB to adapt at speed to circumstance.

In this interview, Golden describes how he builds high-impact, modular teams around outcomes rather than features.

He also emphasises the need for 3 different Product Manager archetypes (the 'pioneer', the 'settler' and the 'town planner') as the company evolves and the importance of three pillars: process, context, and listening.

Much of the work of a Product Manager is making sure everybody understands the what and the why. Letting teams figure out the how empowers them to do better and find more meaning in their work.

How to make your 1st Customer Journey Map

A primer for Product Managers, by Lauren Holliday.

In Summary: According to Harvard Business Review, a customer journey map is a very simple idea: a diagram that illustrates the steps your customers go through in engaging with your company: be it a product, a retail experience, or a service.

A touchpoint is any time a potential customers comes into contact with your business - before, during or after they purchase something from you. You want to take every touchpoint into account so you don’t miss an opportunity to improve your persona’s experience with your company.

Once you understand your persona’s goals and plot their touchpoints, it’s time to look at the big picture - the totality of their experience with your company. Customer journey maps help you understand where personas are experiencing points of friction and how they are feeling at each step of the way.

A first-timers guide to User Onboarding

In Summary: Leading product thinkers agree that first-time user experience is the most critical component of a product’s flow. Pulkit outlines how you can improve your users' chances of being successful.

First, ensure the same person or team works on all aspects of onboarding. This will ensure a consistent experience for users and better alignment with company objectives.

Next, make sure you understand B J Fogg's theories about user motivation, ability and the necessary triggers that precede action.

Finally, understand the techniques. There are 3 main techniques for onboarding new users: email, in-app messages and product tours. Its best to use a combination of each to motivate, teach and engage users.

It’s wrong to think of onboarding as a 'set-and-forget' flow. Instead, consider it a feature that needs fine-tuning to increase engagement, or a function (e.g. marketing) that constantly needs new experiments. 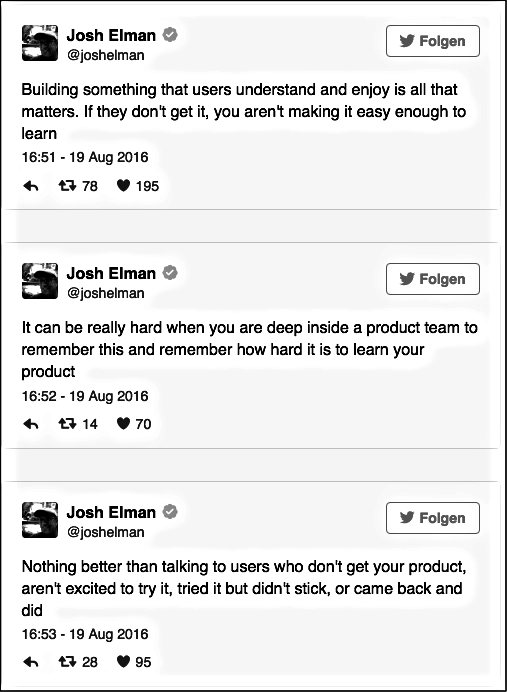