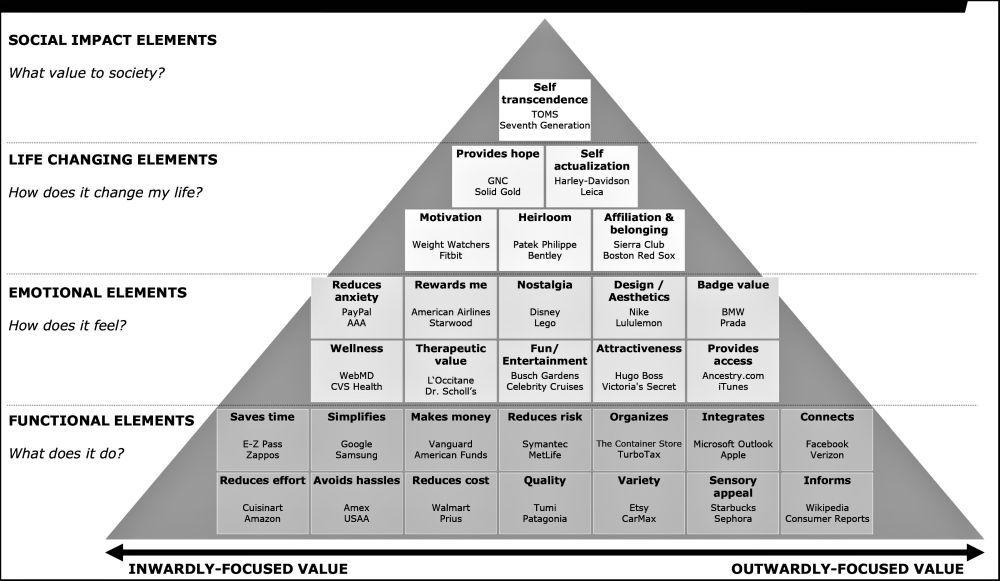 Do you know your Product's 'true' Value?

Value is the new, new thing in product. As competition for user mindshare increases exponentially, founders and product leaders need to clearly define their value in order to communicate how they differentiate.

Leading the field in this regard is Bain's Eric Almquist. After extensive research, he and his team identified 30 'Elements of Value' that a product or service can deliver. Extending Maslow’s Hierarchy of Needs, the team at Bain conceived a 'Pyramid of Value' that stacks elements in four levels: functional, emotional, life changing and social impact.

Almquist points out that value is distinct from price in the mind of the user and that consumer loyalty (and often greater margin) typically get stronger in the elements further up the stack.

In Summary: An ability to see the world as it could be, not as it is, is a quality most product leaders possess. The rest of us suffer from what Andrew Chen calls 'the Bad Product Fallacy.' This states that our own experiences (and opinions) are terrible predictors of product success.

If you've ever played with a product and concluded 'this is just a toy', imagine what would happen if that simple set of features grew into a rich, complex platform. Take Instagram as an example. It was once a 'photo filters' app. Now it's one of the largest media properties in the world.

Conversely, products can start out super-premium, then fall in price to find success in a large, mainstream market. Tesla and Uber are both following this path. If you've ever looked at a product and asked, 'Why would anyone pay so much for this?' think through what happens if it becomes much cheaper.

We're afflicted by Bad Product Fallacy because we forget how circumstances change. And, in tech, things change very quickly.

What Apple, Google, and Tesla get wrong about Product

In Summary: Don Norman was teaching good design before most of us knew what it was. A VP at Apple in the 80s, he virtually invented the concepts of 'usability' and 'user-centred design' - themes no Product Manager can afford to ignore.

At 81, he remains as active, and as relevant, as ever. Great design never dates. It does, however, get overlooked from time to time and, in this interview, Don gives his frank assessment of how product giants like Apple, Google and Tesla measure up against his exacting standards.

His conclusions? Apple, flushed by their success, are slipping. Google are spread too thin. And Tesla, under intense pressure to deliver, are prioritising speed over safety.

The torchbearer of good product design right now is, surprisingly, Microsoft. Under Satya Nadella, the Seattle giant has evolved from being a sales engine for the Windows OS to a world leader in Human Computer Interaction.

How to position your Product

Are you Snickers or Milky Way? asks Basecamp's Ryan Singer.

In Summary: Without a clear point of view on what makes you different, it’s easy to wander. Especially in product.

Focusing on individual features and experiences is good, but you should never forget about the position you’re trying to occupy within the market. Ryan takes the classic battle between Milky Way and Snickers as an example.

Starting out as direct competitors both Product Teams found, via research, that they were, in fact, completely different. Snickers, a pick me up, was consumed in public. Milky Way, an indulgence, was a strictly private affair.

The Product Teams for Snickers and Milky Way began to understand the trade offs they needed to make to maintain their position. When you know your position, you can say 'no.' When you don’t know, you build features because you’re afraid of what will happen if you don’t.

Why building Products that Customers want leads to Ruin

In Summary: Just because customers complain, doesn’t mean they'll stop buying from you. In fact, customers who complain the most, are less likely to switch. No one bothers to complain about a product they don’t plan on using. Think of Spirit Airlines in the US or RyanAir in Europe. Customers hate them, but they keep coming back.

This phenomenon is best explained by what is known as the 'Jobs to be Done' (JTBD) theory of product value. How JTBD relates to Product Managers is best summarised in Alan Klement's recent book, the awesomely-titled, 'When Coffee and Kale compete'.

Customers have a sense of how much better their life would be but not how to make that outcome happen. This is the job of the product innovator. And product innovation becomes a lot easier when you focus on what customers do, instead of what they think they need or want.

In Summary: Onboarding is one of the key pillars of 'Productisation', the process Product Managers bring to startups that makes their technology usable and valuable.

New users don’t sign up for your product because they are excited about learning how your UI works. They sign up because they're interested in the value you promised to deliver.

Nick believes the traditional 'swipe-through' tutorial is flawed for this reason. Users won't remember the details of what you tell them and would rather learn by just using your product. Contextual onboarding is far more effective. Instead of asking users to remember things up-front, provide guidance as they go

To facilitate activation, Instagram has turned the 'zero data state' into a learning opportunity. Where you would normally see your photos, it says 'No Posts Yet - Tap on the camera to share your first photo or video'.

Onboarding is about helping users improve their lives . The objective isn't familiarising users with your interface, it's helping them achieve their goals with your product.

“A product that can do everything doesn’t end up being used for anything.”